This building on Place Saint-Augustin is the work of the chief architect of the national palaces, Charles Lemaresquier, a member of the Institute. We owe the statues surmounting the columns of the facade to sculptors also from the Institute:

Injalbert for the “Turc”, François Sicard for the “Poilu”, Jean Boucher for the “Marin” and Paul Landowsky for the “Cuirassier”. This beautiful building houses a hotel with 89 rooms, dining rooms, an air-conditioned bar, a prestigious bistro, a fitness room, a library, reception rooms that can accommodate up to 1,000 people for cocktails and 500 covers for meals. , a conference room with 250 seats and a renowned weapons room. Located in the heart of Paris, the Cercle National des Armées welcomes active, retired or reserve officers, category “A” or equivalent officials of the Ministry of Defense, as well as holders of the Legion of Honor, the auditors and former auditors of the Institute for Advanced Studies in National Defense (IHEDN) or the Center for Advanced Studies in Armament (CHEAr) as well as their families and their guests.

The Cercle National des Armées finds its origins in a presidential decree of February 5, 1887 and in a law of April 16, 1924 authorizing its establishment on the grip of the barracks of the Nursery.

It was built, from 1925 to 1927, on land liberated by the destruction of part of the barracks of the Nursery, including its facade. The President of the Republic Gaston Doumergue inaugurated it in 1928.

The National Circle of Land and Sea Armies, which was until then avenue de l’Opéra, thus settled on Saint-Augustin square.

The neo-classical building is the work of Charles Henri-Camille Lemaresquier, chief architect of the national palaces, born in Sète on October 16, 1870 and died in Paris on January 6, 1972 (he is buried in the Sète marine cemetery ).

He is the son of Louis Lemaresquier, famous poster designer of the 19th century. Father of Christmas Lemaresquier, architect, who will assist him then succeed him as workshop boss at the National School of Fine Arts in Paris and join him at the Academy of Fine Arts of the Institut de France. He is also the stepfather of Michel Debré and the maternal grandfather of Jean-Louis Debré and Bernard Debré.

Pupil, friend and successor to the National Superior School of Fine Arts in Paris, of the first Grand Prix de Rome Victor Laloux, his works are rare:

The Headquarters of Félix Potin in Paris, 1910, n ° 51 rue Réaumur;
The Hotel and the Imprimerie des Journaux officiel, in Paris, rue Saint-Saëns;
The Palais Berlitz in Paris, a block between the boulevard des Capucines, the rue Louis le Grand, the rue de la Michodière and the rue de Hanovre; 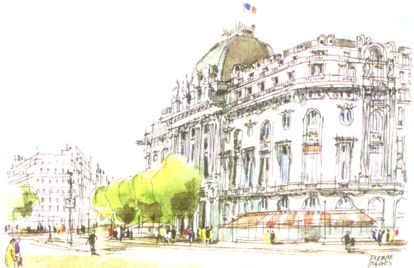 Military symbols are found on the carved decorations. Thus, the remarkable statues surmounting the columns of the facade are the work of the sculptors, members of the institute: Jean-Antoine Injalbert for the “Turco”, François-Léon Sicard for the “Poilu”, Jean Boucher for the “Marin “And Paul Landowsky for the” Cuirassier “. On the side façade located at 35 rue Laborde, you can admire warrior attributes (helmets, spades, standards) on either side of the window on the 1st floor, and a chariot on horseback above the window on the second .

The Cercle National des Armées is a public administrative establishment with a social and cultural vocation endowed with legal personality and which responds to a double vocation:

This website uses cookies to improve your experience while you navigate through the website. Out of these, the cookies that are categorized as necessary are stored on your browser as they are essential for the working of basic functionalities of the website. We also use third-party cookies that help us analyze and understand how you use this website. These cookies will be stored in your browser only with your consent. You also have the option to opt-out of these cookies. But opting out of some of these cookies may affect your browsing experience.
Necessary Toujours activé
Necessary cookies are absolutely essential for the website to function properly. These cookies ensure basic functionalities and security features of the website, anonymously.
Functional
Functional cookies help to perform certain functionalities like sharing the content of the website on social media platforms, collect feedbacks, and other third-party features.
Performance
Performance cookies are used to understand and analyze the key performance indexes of the website which helps in delivering a better user experience for the visitors.
Analytics
Analytical cookies are used to understand how visitors interact with the website. These cookies help provide information on metrics the number of visitors, bounce rate, traffic source, etc.
Advertisement
Advertisement cookies are used to provide visitors with relevant ads and marketing campaigns. These cookies track visitors across websites and collect information to provide customized ads.
Others
Other uncategorized cookies are those that are being analyzed and have not been classified into a category as yet.
Enregistrer & appliquer